Shree Krishna Ghimire, 20 works in human craft Nepal as digital marketing analyst. He has been working there for more than a month now, after he attended 4 months of computer course at the HOPE worldwide Nepal VTC center.Before the training, he had no idea about the online marketing, he learnt the basics of computer, office package (MS word, MS PowerPoint, MS Excel) and working online.

He said, “There were 10 of us in the training, I had a good time learning alongside my friends. The best memory I have from there is that all the participants, belonging to the same age group would joke around and laugh while learning, it was fun. Our teacher would give extra tutorial videos to learn at home based on our interests. The information and knowledge I acquired has been invaluable”. After returning to home from the training, he was very determined to learn about the SEO and Facebook Marketing.

Shree Krishna’s is doing quite well. He makes around NRs 10,000-20,000 (about $100 to $200 USD) every month. Shree Krishna plans to flourish from in the future, by establishing his own digital marketing company. He says “I want to thank Hope worldwide Nepal for helping me to increase my computer skills and my confident. I used to be a very shy person. I hardly used to speak. I can now easily carry out a conversation. During the training, the facilitator would give us to do presentation on different topics, after which we had to explain everyone about the subjects. “ “I think HOPE worldwide Nepal helped me move in the right direction. I don’t know what I would’ve done without their support. I have also come to realize how important technology is in today’s world.”

Among the new students is Basanta Neupane. His family of five moved from the remote and underdeveloped district of Kailali. It was not possible for them to earn a living there. Since then, his father Prem Neupane has been working as a cloth seller in the streets at public places of Kathmandu. Prem is a very hard working man, but his work does not provide him enough earnings to support his family properly. He would have never been able to save enough money to pay school fees for his children. Prem and his two brothers Desenta and Bibek Neupane were admitted to the HOPE school. He is a hardworking student and wants to become a doctor.

Ranju Tamang is an eight year old girl. She studies in class one. She is the youngest among two siblings. Her five family members share a single rented room. Her family is from Nalang village. Her parents got married in the village. Due to hardship there, they moved to Kathmandu for the sake of the family. Her father works as a construction laborer but his work does not provide him with enough earnings to support his family properly.

When her father heard of the HOPE school, he quickly approached us. Ranju was admitted into class one for this new academic session. After one month with the HOPE school she was is still very quiet and reserved in the class. The HOPE school teachers are trying their best to encourage her.

Sanjay Tamang is a 12 year old student from Balajuheight. He has 3 sisters. His family had migrated from their village to Kathmandu w 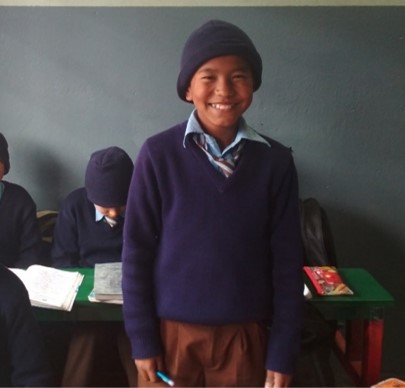 ith hopes of making their life financially better. Sanjay’s father worked as an labor in Kathmandu and  earned Rs.500 to 800 in a day on which he was barely able to put enough food for his family on the table.

Few months back his father Ram was found to have some form of the heart disease which could not be operated so he had to stop going to his work.

Therefore his mother and elder sister had to work as an labor to earn their daily bread. As things are quite challenging for a boy of this age, Sanjay is very determined not to drop out of school and to make the most out of it. Sanjay is doing great in his studies. He wants to become an engineering.

We wish the best for him and his family.

Mangala Devi Pradhanang of Bhaktapur Municipality, has handed over financial assistance of NRS. 100,000 to Asha Vidyasram School located in Balaju height, Kathmandu to support the needy children. She gave this amount from her savings and from the gifts she received on her birthday. Asha Vidhyashram School is a program of HOPE worldwide   Nepal. This function was organized at Iwamura College of Health Science, Bhaktapur.

Rajib Bhujel is 8 years old student of grade 1 in   HOPE school of Kathmandu. He is a confident and   hardworking boy.  He lives wi

th his mother, aunt, grandmother, two cousins and three siblings (also student of HOPE school) in a two room rented house. Rajib’s mother is a lone bread winner for   the family. His aunt is a victim of cancer. His uncle left his family after her  aunt suffered  from cancer. His mother works as a labour. Rajib and his siblings  admission in HOPE School in 2017 was a great relief for his mother. His mother is very much grateful to HOPE School. She shared it would never have  been possible for her to send her children in a good private school. HOPE School made it possible for him to obtain good quality education . She is happy to see her children  developing into responsible and educated person.

Urmila Nepali is a student of one standard in Asha Vidhyashram School. She is seven years old girl . She was born without 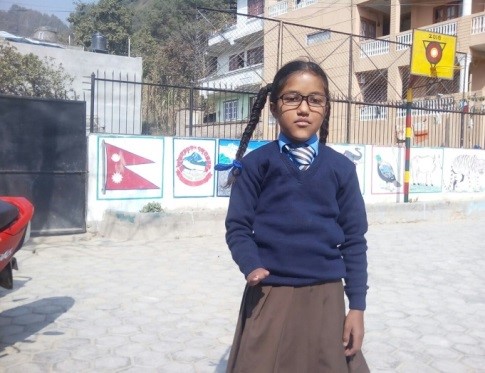 her right hand. She lives with her mom and relatives, nine of them share two rented rooms. and her father lives in the village far from the city. It takes more than seven days to walk to her village. No vehicles can reach there. Since the roads are not proper.Her father works as primary teacher for family livelihood. And has no income to afford quality education in city. They came to know about our school and came to us. She has great Zeal and enthusiasm. She wants to become doctor. Urmila is very fast learner and with no doubts, she is one of the bright students in her class.